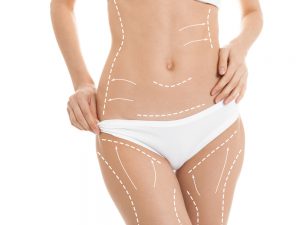 Liposuction is a plastic surgery procedure that removes fat “only” (adipose tissue) through very small incisions by placing a negative pressure (suction) on a cannula (tube). The procedure first became widely performed in the United States thirty years ago and is still very popular for treatment of areas of diet- and exercise-resistant fat. The advantage of liposuction is changing body shape with fat removal while at the same time limiting skin scarring. The disadvantage to liposuction is that excess skin (if it exists) is not removed. The liposuction procedure primarily removes fat but does also remove some liquid material as well.

Liposuction removes fatty tissue by placing a negative pressure on a cannula (metal tube) that is placed under the skin. Conventional liposuction (the first modern technique used) was performed by inserting the cannula underneath the skin. The blunt tipped cannula is moved under the skin by hand and the combination of the movement of the cannula and the negative pressure removes the fat. With conventional liposuction there is no “pre-treatment” of the fat before it is removed, so it is removed “intact” (in lobules). Other techniques “pre-treat” the fat before removal.

Another technology used for liposuction is PAL, or power-assisted liposuction. This technology utilizes a cannula, similar to conventional liposuction, but the cannula is moved by a hand piece. The PAL device moves the cannula in three planes, that is, oscillation (back and forth) and translation (side to side). The PAL device is very effective in removing fat, and because it does not utilize ultrasonic or laser energy, the potential for complications observed with those technologies (skin burns, for example) is lower.

In summary, liposuction works by placing a negative pressure on a cannula that is placed under the skin which removes either fat lobules or liquefied fat. Liposuction can be done in many areas of the body to improve contour while avoiding long scars from skin incisions.

To find out if liposuction can help you achieve your goals, please contact our office to schedule a consultation.